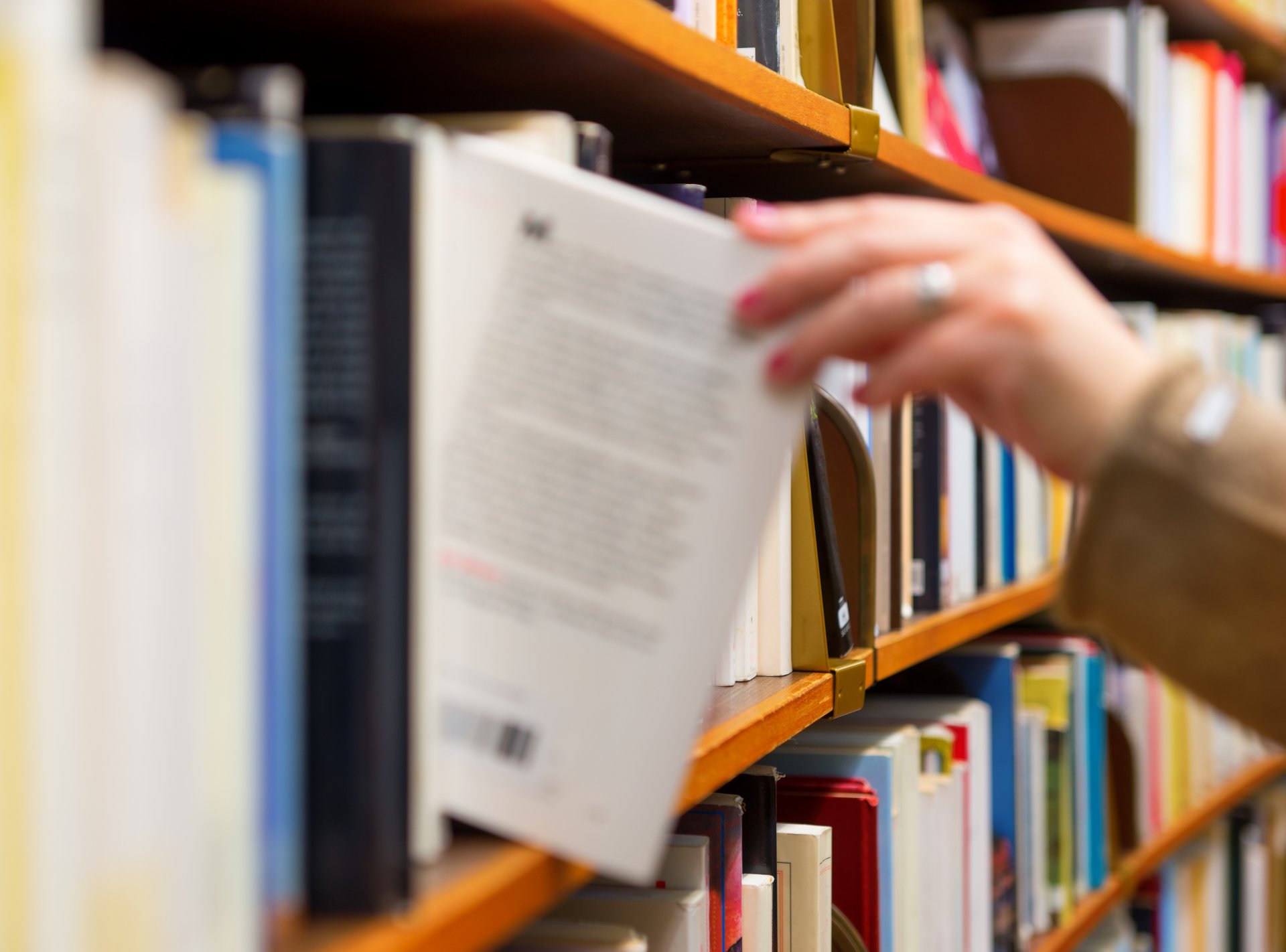 Education in the Czech Republic

The Czech Republic’s education system has a long history, as well as a dynamic present. Charles University was the first university in Central and Eastern Europe at the time of its establishment in 1348. Since then, higher education has spread throughout the country. Compulsory school attendance was introduced in 1774, after which a system of lower levels of education gradually evolved. In recent decades, the education system has undergone numerous and profound changes focused on decentralisation, diversification and inclusion.

Apart from public schools, the Czech education system at lower levels comprises many private and church schools, as well as a few state schools established by various ministries for special purposes. The same conditions apply to all pupils, including foreign citizens. The language of instruction is Czech, although some schools may be allowed to teach in other languages. In addition to the national system, several foreign schools operate in the Czech Republic. Care for the youngest children is generally provided outside of the education system, most commonly at children's group. 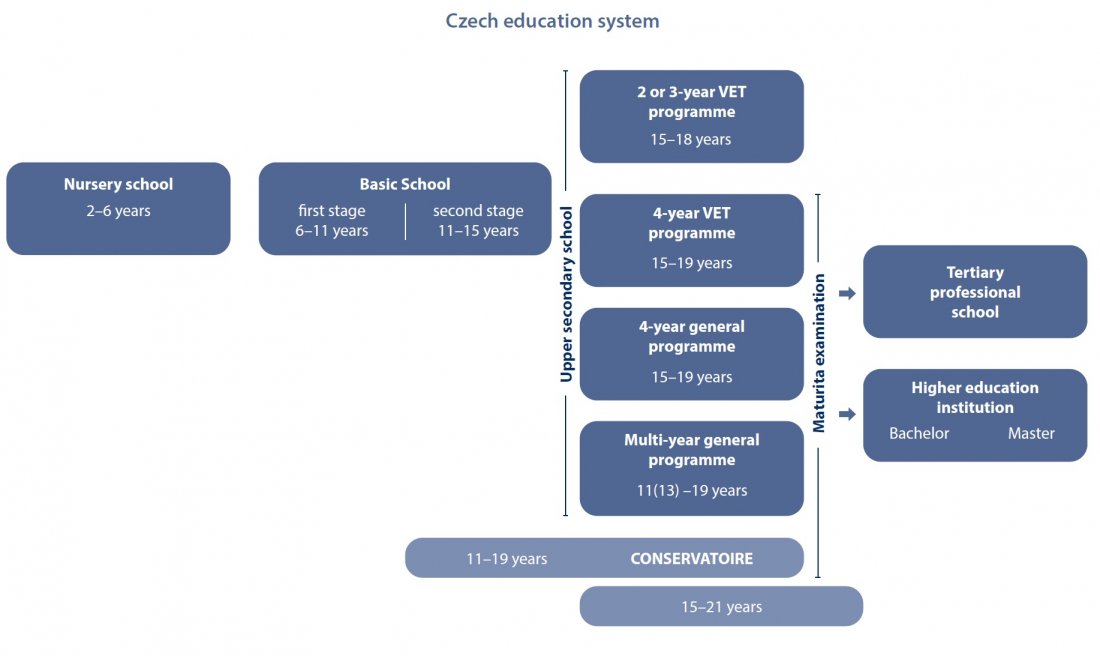 School attendance is compulsory for nine years, usually from age six to 15.

Primary and lower secondary education is provided mainly by single-structure basic schools, which are divided into a five-year first stage and a four-year second stage. There are about 4,000 public and over 300 private/church basic schools.

At the lower secondary level, there are also other education opportunities. After successfully passing the admission examination or aptitude test, gifted pupils may be admitted to an eight-year or six-year secondary general programme provided by more than 300 schools or one of the five eight-year conservatoires.

The fees at private schools vary, e.g. at multi-year general schools, the average tuition is around EUR 1,800 per year.

There are two main study pathways:

Four-year general and vocational programmes, multi-year general secondary programmes and conservatoires provide upper secondary education with the Maturita examination which entitles graduates to enter the tertiary level of education (most of them do so). The admission procedure includes a centrally organised admission examination and/or an aptitude test; the head of the given school may set other (school-specific) conditions.

In two- and three-year vocational programmes, pupils attain upper secondary education with a VET certificate based on the VET final examination. Graduates cannot proceed directly to tertiary education; however, there are some flexible arrangements for those wishing to continue their studies (even later in life). The admission criteria are set by the head of the given school.

Education is provided free of charge at public schools; at other schools, the fees vary (the average fee in four-year programmes is around EUR 800 for the first year).

With its nearly 700 years of academic tradition, the Czech higher education system consists of more than 60 institutions in over 20 cities, of which 26 are public, 33 are private and two are state institutions. The Czech Republic is also home to 17 branches of international universities and colleges. There is at least one institution in almost every regional capital, stimulating regional development and providing local industries with good access to skilled labour. In addition, there are approximately 150 tertiary professional schools. 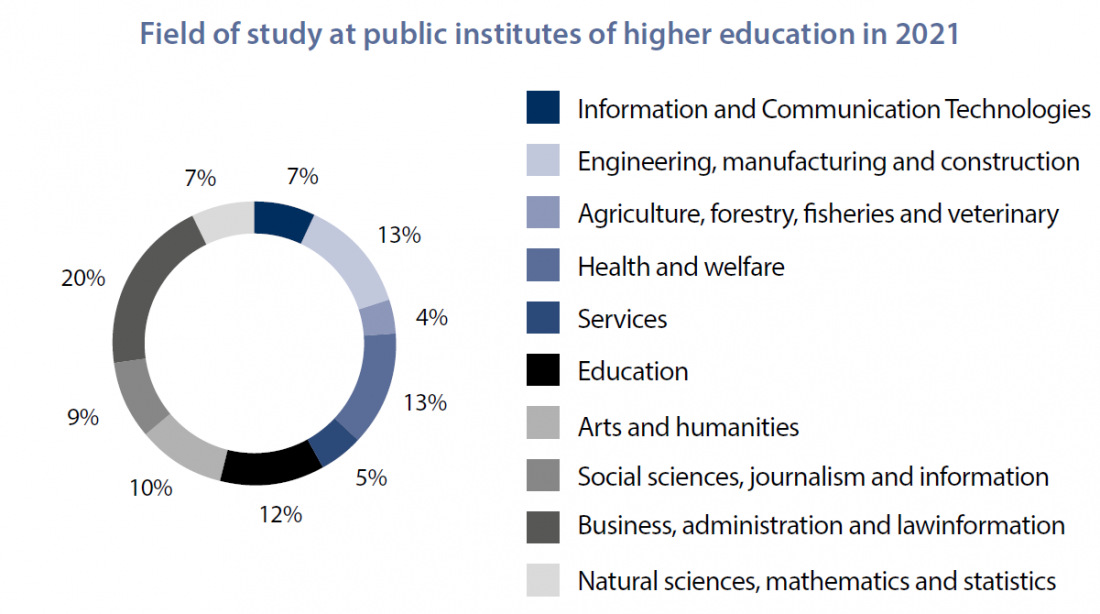 At public HEIs, fees are paid in some cases, e.g. study in a foreign language. At private HEIs, the fees vary; the average fee is around EUR 1,100 for the first six months of a bachelor’s programme.

Business is the most popular field, followed by engineering, health and welfare and education. Every year, about 7,000 new, skilled master’s-level engineers and experts in natural sciences enter the labour market, together with over 1,000 Ph.D. graduates in the same fields. 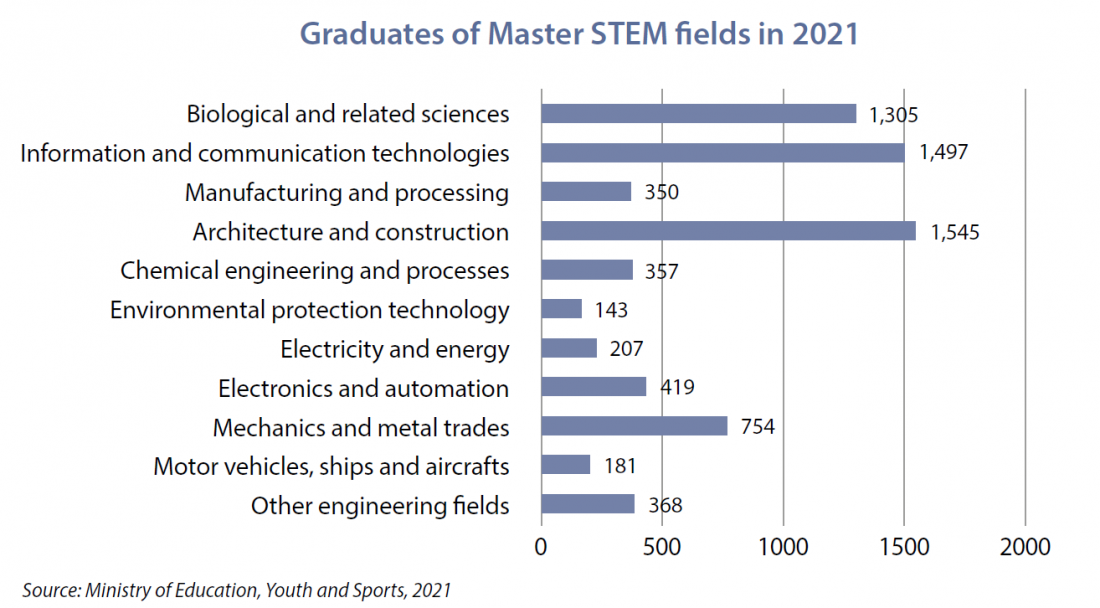 Today, the Czech Republic is also an attractive destination that is increasingly popular among international students. Currently, there are around 52,000 international students enrolled in full degree programmes. Before the pandemic, about 15,000 students chose to study in the Czech Republic in exchange or short-term study programmes every year. International degree students can choose from over 1,000 diverse accredited bachelor’s, master’s and doctoral programmes in English and other foreign languages. More than 150 offered programmes are joint or double degree.

The Czech Republic has achieved international renown in areas ranging from Egyptology to high-tech fields such as non-woven nanofibres, as well as a success in, for example, new treatments for cancer and haematological and urological diseases. The country’s university-based research focuses on the development of laser systems, biomedical and materials science, energy research and complex mathematical modelling in the natural, medical and technical sciences.

A detailed description of the Czech education system is available in English in the National Education Systems database administered by the EURYDICE network (https://eacea.ec.europa.eu/national-policies/eurydice/content/czech-republic_en). The sources of statistical data in the text above are the database of the Ministry of Education, Youth and Sports and a survey conducted by the Czech Statistical Office.