The Czech Republic – Heart of Europe

The Czech Republic, also known as Czechia, is a small country in the heart of Europe. It has an advanced economy and a high standard of living. In fact, it is the one of the most stable and prosperous of the post-communist states. You can find there the oldest university in Central Europe and more then 2000 castles and chateaux which is more than in any other country in Europe. This small country is significant for its nature, historical cities and good beer. It attracts tourists and professionals from all over the world who come to visit, live, work or study to this beautiful country.

The Czech Republic is a landlocked country in the middle of Europe. It is bordered by Germany to the west, Poland to the north, Slovakia to the east and Austria to the south. Thanks to its location, which makes it a notional gateway between Western and Eastern Europe, the country is often referred to as the “Heart of Europe”. The Czech Republic is comprised of parts of historical territories which for a significant part of history were the Lands of the Bohemian Crown, namely Bohemia, Moravia and part of Silesia. Administratively, the country is divided into 14 self-governing regions. The capital city, Prague, is also one of the regions. Approximately 10.7 million people live in the Czech Republic. The population of Prague is 1.3 million.

From the 16th century, the Czech lands were ruled by the Habsburg dynasty, which gradually incorporated the territory into the Habsburg monarchy, later the Austro-Hungarian Empire. In response to Germanification, the Czech national revival began at the end of the 18th century as an effort to restore Czech culture and language and, later, to foster the acquisition of power by Czech political parties. The Czech lands underwent major economic development in the second half of the 19th century. The majority (approximately 70%) of industry in Austria-Hungary at  time was concentrated in the Czech lands.

At the end of the First World War, Czechoslovakia was established through the joining of the Czech lands with the geographically and linguistically close Slovak nation. Tomáš Garrigue Masaryk was elected the first president of Czechoslovakia. During the interwar period from 1918 to 1938, Czechoslovakia became the last remaining democracy in Central Europe and enjoyed a rich industrial heritage and high quality of life.

The Communist Party of Czechoslovakia seized power in February 1948. The country became a totalitarian state and part of the Eastern Bloc. The structures of civil society, free association and economic life were suppressed. The end of the 1950s saw the start of a gradual liberalisation, which came to an end on 21 August 1968, when an invasion by the Soviet Union and other Warsaw Pact countries crushed the reform movement known as the Prague Spring.

The Velvet Revolution, which began on 17 November 1989, overthrew the communist regime and enabled the return of democracy and restoration of free enterprise. Václav Havel became the first president of the free, post-communist Czechoslovakia. On 1 January 1993, the Czechoslovak Federative Republic was dissolved through a bilateral political agreement, the result of which was the establishment of two independent successor states: the Czech Republic and Slovakia. The Czech Republic was gradually accepted into Western European political structures, joining significant World and European organisations.

The Czech Republic was established on 1 January 1993 in connection with the dissolution of Czechoslovakia. Since that date, the country has had a constitution according to which it is a parliamentary democracy with a liberal political system based on free competition of political parties and movements. The head of state is the country’s president, whereas the supreme and only lawmaking body is the Parliament of the Czech Republic.

Parliament is a bicameral body composed of the Chamber of Deputies and the Senate. The Chamber of Deputies has 200 members elected every four years on the basis of proportional representation. The Senate’s 81 members serve six-year terms, with two-round majority elections held for one-third of seats every two years.

The Constitutional Court, with 14 justices, is the guarantor of constitutionality, ensures protection of fundamental rights and can repeal laws or provisions of laws. However, it is not part of the system of general courts. The Supreme Court is the highest body in civil and criminal justice as well as in the area of administrative adjudication.

The Czech Republic is a developed country with a market economy. According to a number of economic, social and political indicators, it ranks among the world’s most advanced countries. Since 2006, the Czech Republic has been part of the group of the thirty most advanced countries according to the World Bank, to whose budget it has become a contributor. The country is considered to have the most stable and most prosperous economy of all post-communist states. According to Eurostat, it was the eighteenth richest country of the European Union in 2021 in terms of per-capita GDP based on purchasing power parity. It was the second most successful of the new EU members.

In 2021, industrial production increased by 1.6% year on year mainly due to motor-vehicle and trailer manufacturing, production of machinery and equipment, and manufacturing of metal structures and products. Industrial production increased in the areas of paper and paper products, wood processing, manufacturing of wood, cork, wicker and straw products, and basic pharmaceutical products. The most important branch of Czech industry is vehicle manufacturing, including motorcycles and trailers. The other main pillars of Czech industry are the mechanical-engineering, metals, chemical and food sectors. The energy, construction and consumer-goods industries are also important components of the Czech economy. Germany is the country’s biggest foreign trade partner.

The Czech Republic’s currency is the koruna. Due to a foreign exchange intervention carried out by the Czech National Bank, the koruna-euro average exchange rate in 2021 was CZK 25,65/EUR 1. Upon accession to the European Union in 2004, the country committed to adopting the single European currency.

The Czech Republic’s national debt is low in comparison with that of other EU member countries. The development and current state of the country’s finances are also judged favourably in comparison with other European countries. In August 2011, Standard & Poor’s raised its rating of the Czech Republic by two places, from A to AA-, which is the fourth-best possible rating.

The Czech Republic has a well-developed network of motorways and expressways. The motorway network is under construction and is constantly being refurbished. The most significant motorway in the Czech Republic is the D1 joining Prague and Brno with Ostrava and Poland (toward Katowice). Construction of another section of the D11 motorway is being under construction since 2017 with the purpose of connecting Hradec Králové and the Polish border. Another motorway under construction is the D3 linking Prague to České Budějovice and Austria; the D3 will follow the route of the E55 backbone international motorway. The country’s motorways that have already been completed are the D2 connecting Brno and Slovakia (toward Bratislava) and the D5 connecting Prague, Plzeň and Germany (toward Nuremberg).

Together with road transport, rail transport in the Czech Republic makes up the backbone of the domestic transportation system while also serving for international transit. With more then 9,500 km of track, the Czech Republic has the densest rail network in Europe. The corridor routes of the nationwide lines leading to the European rail system for long-distance and transit service cover 1,402 km.

The Railway Infrastructure Administration is the administrator and operator of the absolute majority of railway infrastructure in the Czech Republic. The biggest rail transporter is Czech Railways, whose subsidiary, ČD Cargo, is the fifth-biggest rail freight operator in European Union. The rail freight market has been liberalised; liberalisation of  passenger transport is ongoing. The Czech Republic is connected to the EuroCity international rail network, while some international connections are covered by SuperCity trains, for which the busy Prague-Ostrava line is a core route. Czech Railways operates on the same routes as the high-speed Pendolino trains. Other private railway companies also provide passenger transport. 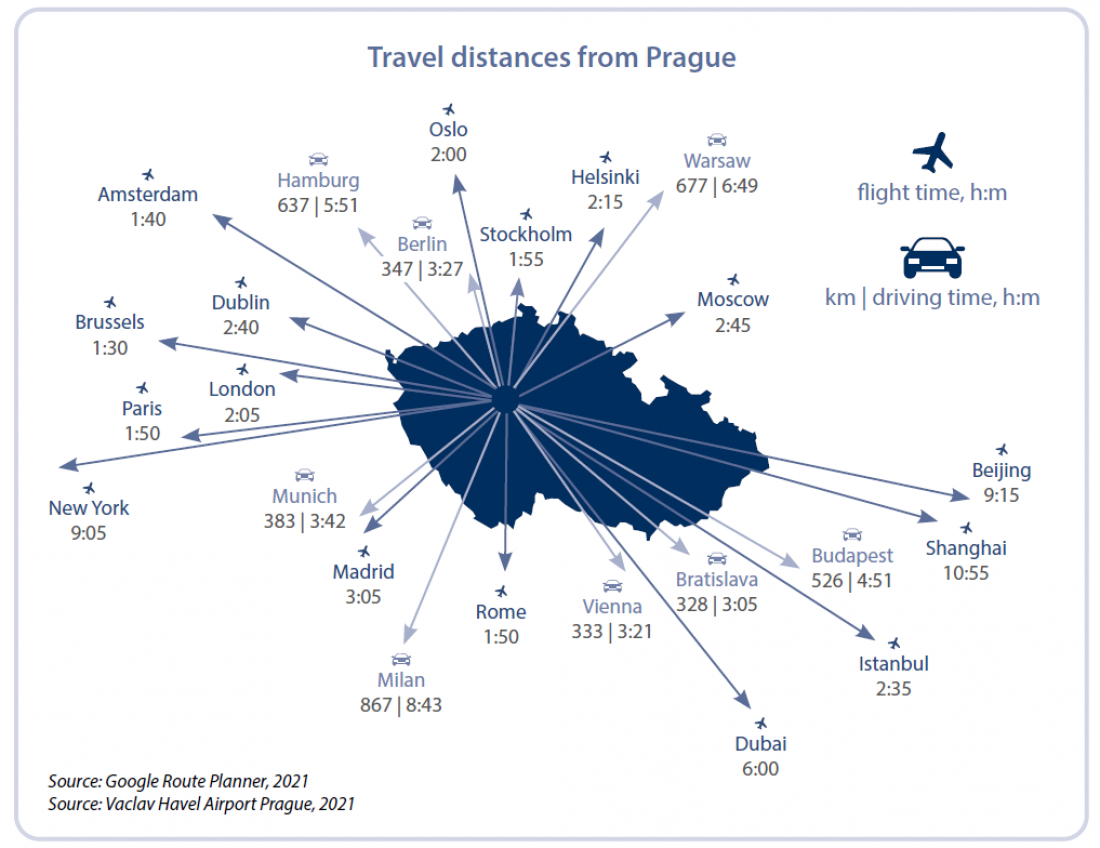 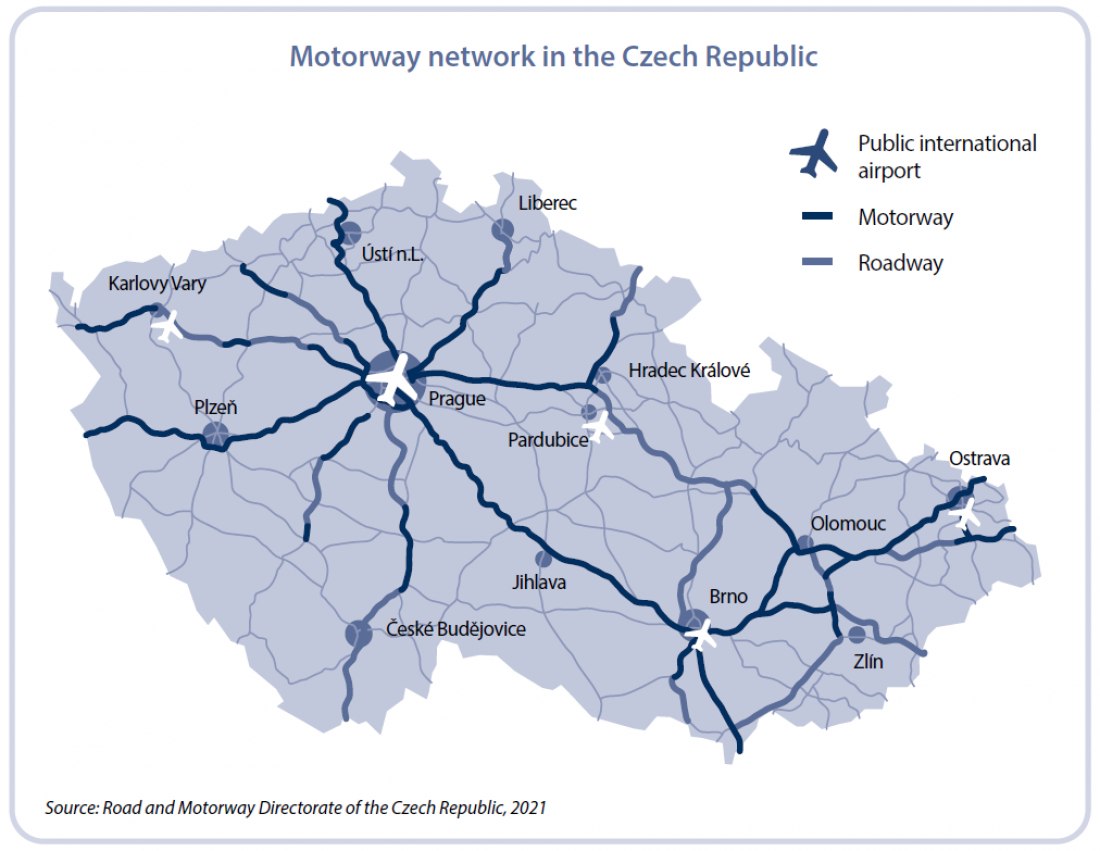